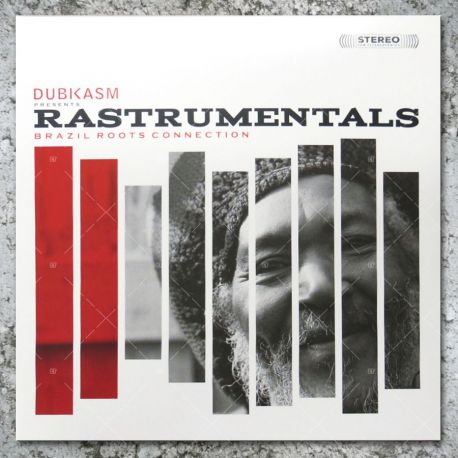 The recording sessions for Rastrumentals took place over seven years, between São Paulo and Brixton, but the roots of the project stretch back to the arrival of Digistep’s father in 1970s Bristol. Aged 18 he had almost nothing to his name, apart from his treasured vinyl collection. These records are still in the family, and have been invaluable in shaping Dubkasm’s unique sound. Rastrumentals combines samba instruments such as the cavaquinho, pandeiro and cuica with the work of some of the UK’s greatest reggae musicians.

Long-time collaborator Ras B features prominently on the album, and his deep, lion-like cadence will be familiar to anyone who listened to Bristol pirate radio in the 90s. While the Nyahbinghi elder is deservedly respected for his contributions to music, his commitment to Rasta values goes much further. He is now the guardian of Fairfield House in Bath, former home of the Emperor Haile Selassie. It is his voice which gives the opening tune, Eco de Jongo, much of its power. An epic tribute to two ancient musics, it combines the circular, frequently improvised dance of Jongo (which dates back to Africans who were brought to Brazil as slaves in the seventeenth century) with Nyahbinghi drumming and the wisdom of the elder. The cavaquinho is strummed to give the tune a samba edge, and minimalist ‘plate and knife’ percussion locks around Rastafarian kette drumming to create a seamless and entrancing rhythmic palette. The music draws heavily on the Samba de Roda, which came to be seen as an expression of identity and a means of empowerment for the oppressed, and is a natural ally of Rastafarianism’s messages of righteousness and uplift.

Monte de Sião also features Nyahbinghi drumming, but here the kette is used alongside the distinctive Brazilian friction drum known as the cuica. The cuica originates from Africa, and some say that it was used as a lion call, because mimics the roar of the lioness.

King’s Highway is, as befits its title, a majestic journey into roots, featuring terrific work from one of reggae’s finest drummers, Blood Shanti, who has played with such greats as The Abyssinians, Sugar Minott, and Johnny Clarke. His incredibly tight pattern, and the soaring horns keep this tune on a stepping rhythm, in the style of New Chapter-era Aswad.

Samba and reggae are not the only styles the LP explores. The influence of jazz on reggae is significant but often overlooked (think of players like Lyn Tait, Tommy McCook, and John ‘Dizzy’ Moore), and tracks like Delta Blues, with its intricate yet easygoing guitar soloing and chorus of horns, and Cachoeira da Fumaça, a warm flute and sax piece, bring improvisation and musical sensitivity to the fore. Lava Quente is an uptempo history lesson with Ras B on the mic as horns and keyboards switch back and forth over gritty guitars and percussion.

Rastrumentals brings together the talents of nineteen musicians across two continents, and is a perfect example of Dubkasm’s unique ability to combine respect for their forebears with relentless innovation. Lewis Hopkin at Stardelta jointly mixed the album before mastering it via ½ “ tape, taking the sonics to another dimension.